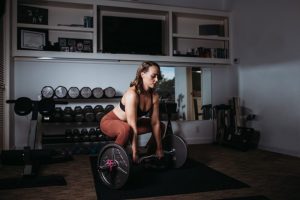 The Sumo Dead Lift is a variation of the conventional deadlift. The difference between the two is in the setup of the lifter’s feet and hands. When the bar is gripped with the lifter’s hands inside their legs, the form is considered “Sumo”  It works your glutes, hamstrings, quads, erector spinae, traps and other back muscles.

The benefits of a sumo deadlift versus a conventional deadlift:

How to Sumo Deadlift: